Every shoreline park is unique — shaped by conditions that differ from site to site as surely as each day’s shifting tides.

But even within this reality, Township Commons on Oakland’s waterfront is a startling act of urban reinvention that, with time, should pull people from across the city to an area that until now has been off the map.

Part historic restoration, part sculptural intervention, the 4.5-acre landscape replaces a mostly demolished shipping terminal that dates to 1930. It’s also the first public space in the initial phase of Brooklyn Basin, a 65-acre development south of Jack London Square that will include 32 acres of parks along the Oakland Estuary.

One eight-story apartment building has opened so far in the district-to-be, on Ninth Avenue near Oakland’s Embarcadero. Five stories of affordable housing will follow this winter, and two other residential projects are under construction. The quartet will total 947 apartments — the beachhead for what is planned to be 3,100 units, 15% of them affordable.

The first buildings are similar to other mid-sized complexes being added to Bay Area cities and suburbs. But Township Commons sets a much different tone: It’s an adventurous departure from the norm that meets the water on its own terms.

In some ways this is inevitable, given the setting.

The space occupies a wharf that sits atop 2,519 piles and was built to hold a warehouse that eventually grew to cover 180,000 square feet. After container ships outgrew the terminal, the port decided in 2001 to lease the site to a team led by Signature Development Group. The project has moved forward in starts and stops ever since and finally broke ground in 2017.

Though history buffs wanted to retain the entire shed, Signature won city approvals to demolish most of it while preserving the front 20,000 square feet, a classically styled concrete facade that faces the Embarcadero. 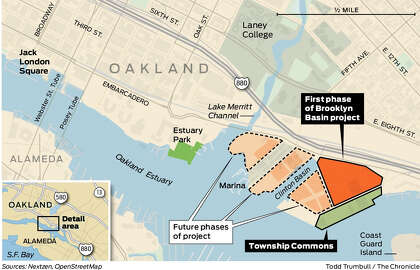 Township Commons, in other words, inhabits a skeletal ghost — but landscape architects Liz Einwiller and Sarah Kuehl turned the act of erasure into a super-scaled celebration, as well as a starting point for what’s to come.

“We want this to be a big deck chair for the city, a place for people to hang,” Kuehl said last week. “It’s an Oakland thing. We’re not interested in erasing history, but folding into it.”

For starters, they persuaded the developers to retain the outer wall and structural trusses of a three-bay-long stretch in one area, as well as the bones of the terminal’s scalloped west end. These elements, complete with a seismic upgrade by the…