Come Together: At the 2023 Serpentine Pavilion, Lina Ghotmeh Invites Visitors to Gather

An elegant canopy of timber “leaves” will be unveiled in London’s Kensington Gardens this summer. Late last month, the announcement was made that Lebanon-born, Paris-based architect Lina Ghotmeh will design the 22nd Annual Serpentine Gallery Pavilion. Ghotmeh’s understated low-carbon proposal draws on the composition of tree leaves for inspiration.

Entitled ‘À table,’ the pavilion is inspired by investigations into the form and function of historical community meeting places and sites of collective ritual, most notably the toguna huts traditionally designed and built by the Malian people of West Africa. Ghotmeh’s desire for the single-story structure, which will be featured at Serpentine South from June 2023 onwards, is for the outdoor space to become a community-centric gathering place with a sense of unbounded welcoming and a venue for celebration. The proposal is a distinct redirection from the spaces of inner reflection or tranquillity the site has hosted in recent years. Defined as a humanist architect Lina Ghotmeh is valiant and progressive in her ambition and approach to the built environment. Throughout the projects undertaken by the team at the self-titled studio, there is a determination to examine the materiality of the earth and our relationship to it. The diverse team endeavors to understand the coalescing relationship between humanity and the physical planet and, in turn, wield it as a tool to develop more meaningful architecture based in history yet for the future.

By examining what is already in existence on site and harnessing heritage with craftsmanship, Lina Ghotmeh has successfully sparked a change in architectural convention. Lina is a staunch believer in sharing local and global knowledge and resources to create powerful and meaningful places of residence and belonging. Throughout her career, Ghotmeh has studied the notions of memory, space and landscape through her own methodology entitled “Archeology of the future.” Before studying to become an architect, Lina was drawn to the lessons taught by archeology and her curiosities surrounding history and its value in informing our decisions for the future emerge as exquisite interventions that enliven memories and the senses. The career-spanning investigation has driven her principles and become the central focus for many global projects undertaken by the multi-disciplinary team at the critically acclaimed international firm of architects, designers, and researchers. 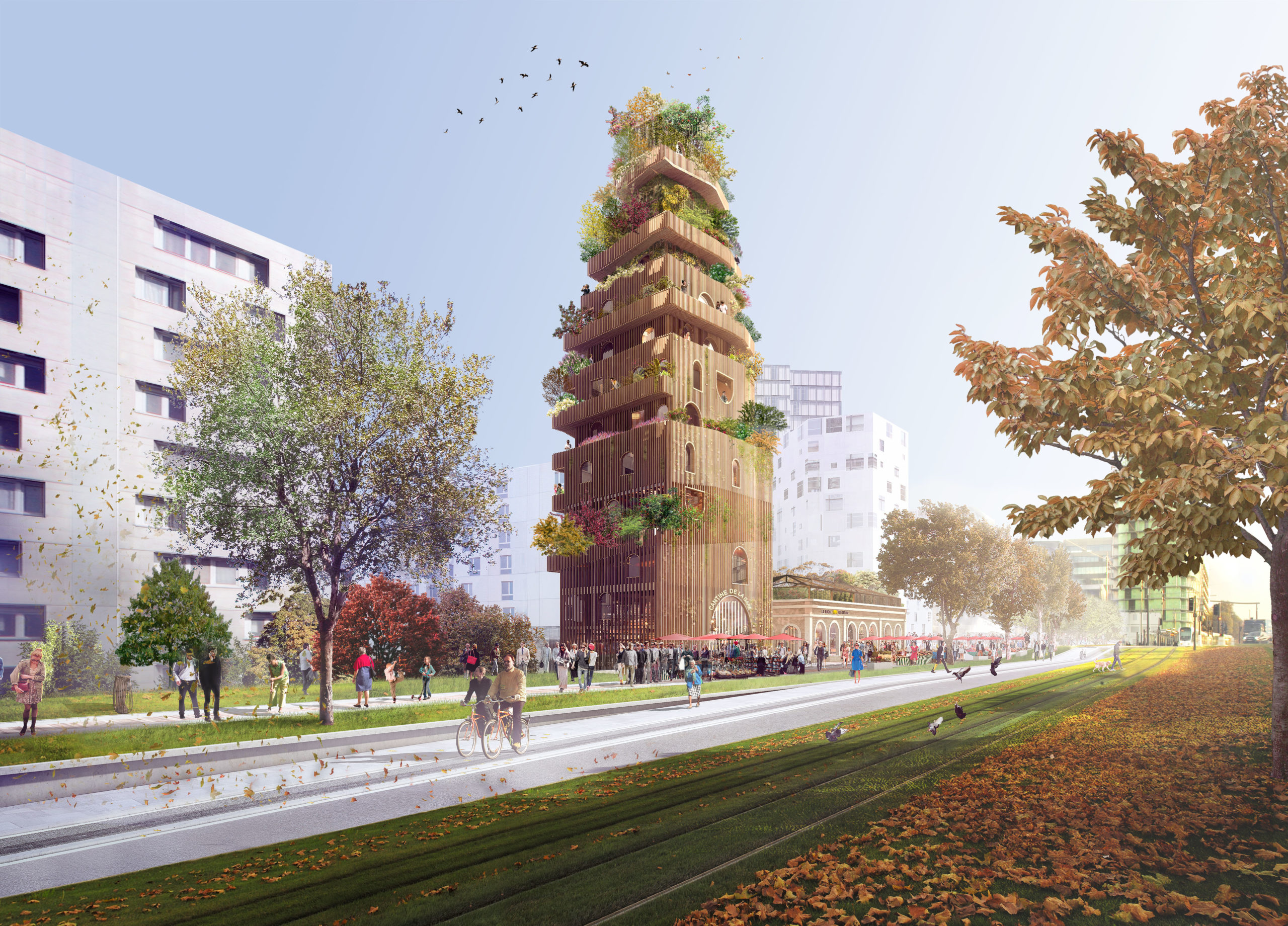 The studio’s projects derive their aesthetics from their close relationship with the surrounding landscape and are an embodiment of the material essence from where they are fashioned.

Widely recognized, the firm’s projects range in scale and geography. They include “Réalimenter Masséna,” a groundbreaking sustainable wooden tower concept set for Paris and winner of the city’s appeal for innovative projects. The structure is designed as a catalyst for change to urban redevelopment strategy.

Likewise, “Stone Garden” is a unique residential tower in Beirut that houses the Mina Image Centre for Middle Eastern Studies and addresses the everchanging narrative and physical presence of its episodic home of Beruit.

Recently their work on “Hermès workshops”, a passive, low-carbon building in Normandy, is a beautiful depiction of timeless craftsmanship and modern sustainable solutions combined to facilitate fusion between object and artisan, artisan and workspace and between workspace and landscape. The result is a beautiful new environment for Hermès development with high environmental ambition.

Honored with numerous Awards, Lina Ghotmeh’s architectural work has been exhibited among venues at the 17th Biennale of Architecture in Venice, the MAXXI in Rome, the Building Centre V&A in London, and the Danish Architecture Center in Copenhagen. All the while, she continues to share her learning, having held roles as an educator at many prestigious institutions, including the Ecole Spéciale d’Architecture, Yale University, University of Toronto. Currently, she is directing the sixth edition of the Skills Academy of the Fondation d’entreprise Hermès.

This year’s pavilion is a continuation of her ongoing practice of ‘Archeology of the future,’ here by exploring notions of memory, space and landscape. An elegant communal table encompasses the broad interior space and creates a space to eat, work, play, meet, talk, rethink, and decide.

In its appearance, the low-finned canopy is intended to be grounding and comforting. The mushroomesque awning rests on a colonnade of slim laminated timber columns and creates a protected walkway around the perimeter of the pavilion that is separated from the exterior through ethereal glass screens. Inside, the soft space is illuminated through the central oculus, which is covered with a tensile membrane to satisfy London’s temperamental climate while additionally creating an encapsulated, protective atmosphere. The title, À table, derives from the French call to sit down and be together at a table. The Pavilion design will allude to such a sense of unity and connection with the form of its structure and organic design as well as the communal seating formation that is an invitation to dwell together and encourages human interaction in a time where community is dwindling, and solidarity and exclusion are prevalent.

The beautiful structure will be available to view and experience from June 2023 in London’s Kensington Gardens.

What You Need to Know about Inspection Services