Details are what bring architecture to life. This holds especially true in The Broad Museum designed by Diller Scofidio + Renfro. Sited in Los Angeles, the project was made to house a large portion of businessman Eli Broad’s art collection. Gathering together the first comprehensive look at the artwork in 40 years, the museum came to life on a relatively compact site. The key element of the design was the honeycomb “veil” made possible by GFRC detailing throughout the façade and roof.

The split between the “veil” and the “vault” reflected the museum’s two key spaces: the public exhibition space and the archive/storage space. The vault storage area is enveloped on all sides by a cellular exoskeleton structure made up of 2500 glass-fiber-reinforced concrete (GFRC) panels. This airy building envelope became the heart of the project, defining both the circulation and spatial experience, as well as the light quality throughout the design. The 120,000-square-foot building features two floors of gallery space and is the headquarters of The Broad Art Foundation’s worldwide lending library, which has actively loaned collection works to museums around the world. In its inaugural year, The Broad attracted triple the number of its projected visitors. Eli and Edythe Broad also built a 24,000-square-foot public plaza, added streetscape improvements and enhanced pedestrian access along Grand Avenue. The museum’s iconic veil is held up by 650 tons of steel lifts that span across the block-long gallery. The final building envelope was simplified from its original design, with its panels rationalized to aid the manufacturing process. During the day, shadows cast by the perforations articulate the façade, and at night, it glows like a lantern in downtown. The museum’s “veil” lifts at the corners, welcoming visitors into an active lobby and shop. On the top floor, visitors experience nearly an acre of column-free gallery space bathed in filtered light. The gallery has 23-foot-high ceilings, and the roof is supported by 7-foot-deep steel girders. 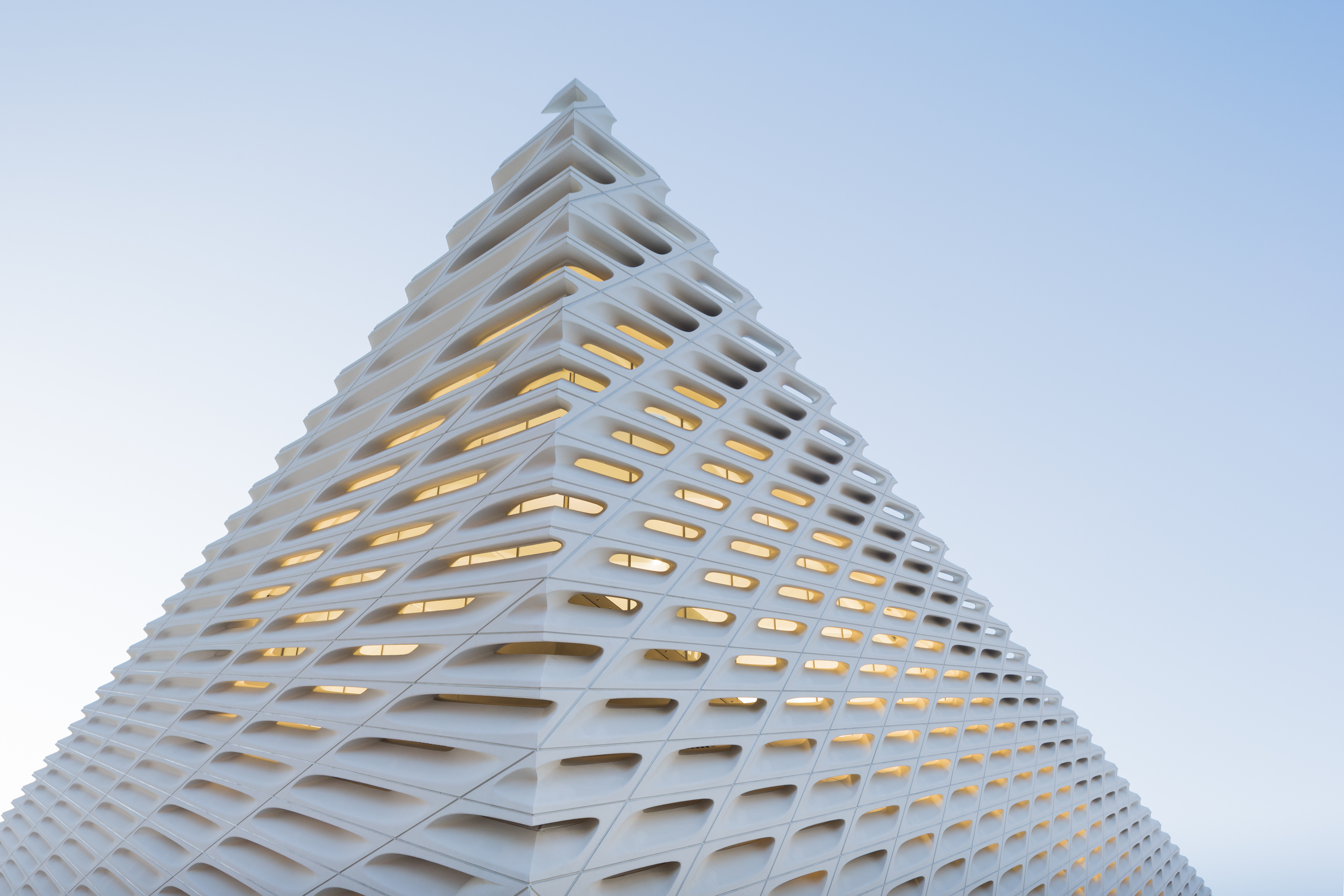 A key component of the veil is that it provides filtered natural daylight. The design team was able to realize hundreds of conical light openings for the building and create the front oculus from a parabolic curve. As the precast concrete manufacturer Willis explained, the design was made possible by using a five-axis, computerized-numerical control machine to carve molds out of high-density foam. Before skinning in fiberglass, the foam molds were sanded and sealed to create the negative formwork for the GFRC panels.

In turn, “the vault” plays a key role in shaping the museum experience from entry to exit. As the DS+R team explains, the heavy opaque mass is always in view, hovering midway in the building. Its carved underside shapes the lobby below and public circulation routes. Its top surface is the floor of the third-floor galleries, where ribbed ceilings and integrated lights echo the latticework of the external façade. 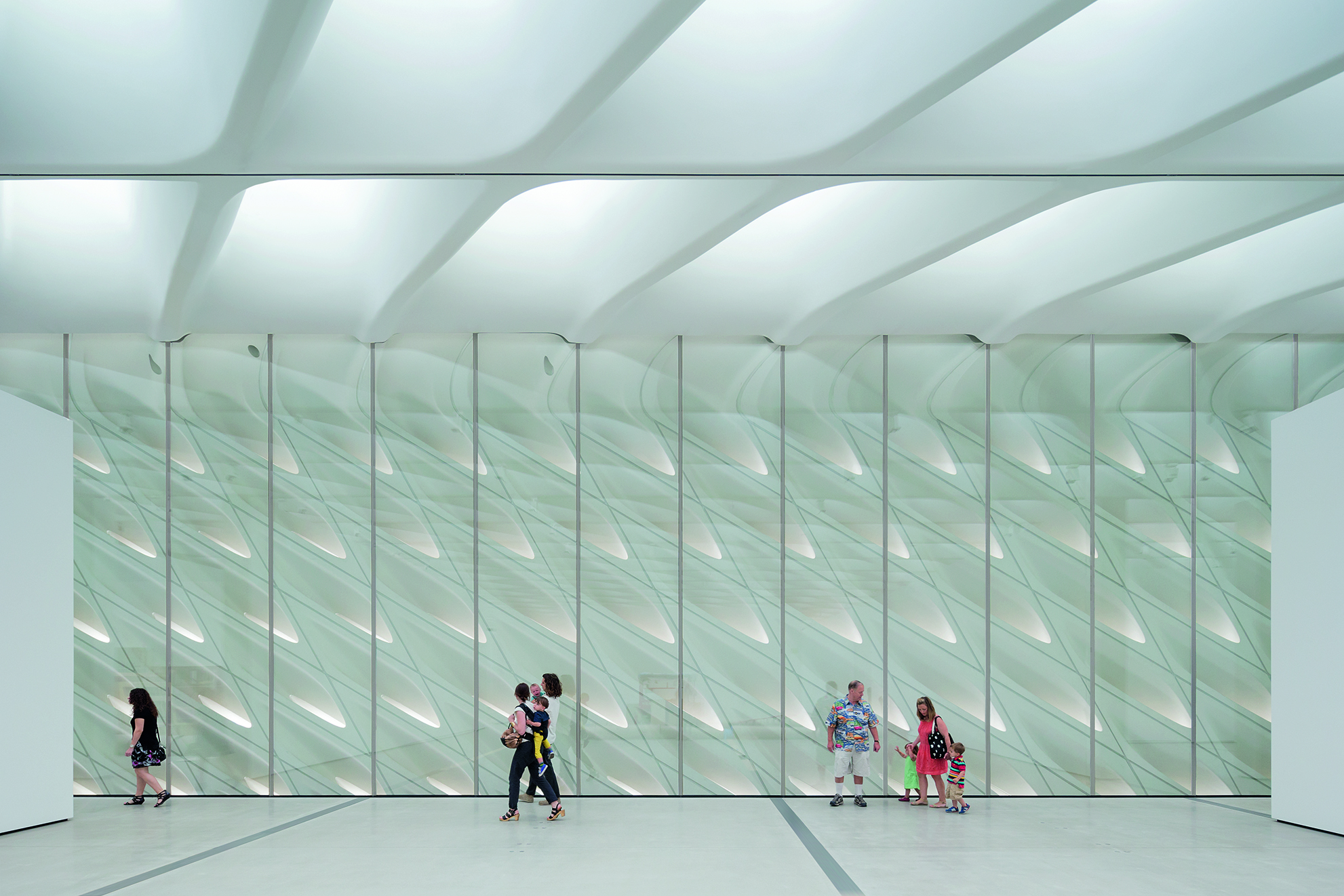 The museum is home to the 2,000 works of art in the Broad collection, which is among the most prominent holdings of postwar and contemporary art worldwide, and has launched an active program of rotating temporary exhibitions and innovative audience engagement. Highlights of the Broad collection include 1960s works by Andy Warhol, paintings and sculptures by Cy Twombly, and Yayoi Kusama’s immersive Infinity Mirrored Room – The Souls of Millions of Light Years Away. Since The Broad opened, the urban experience began to change along Grand Avenue. Pedestrian traffic increased, and street life expanded with food trucks and street musicians appearing as restaurants in the area extended their hours. The Broad is a powerful example of how a clear architectural concept can be brought to life through the details. The result is a new landmark for downtown Los Angeles that embraces the city’s culture of art and design.

How to Build a Mini Golf Course At Home