Announcing AN’s 2022 Project of the Year and finalists

Project of the Year

José Hevia
“The design of Reggio School is based on the idea that architectural environments can prompt in children a desire for exploration and inquiry. In this way, the building is thought of as a complex ecosystem that makes it possible for students to direct their own education through a process of self-driven collective experimentation.

Avoiding homogenization and unified standards, the architecture of the school aims to become a multiverse where the layered complexity of the environment becomes readable and experiential. It operates as an assemblage of different climates, situations, and regulations. Its vertical progression stacks a ground floor, engaged with the terrain, with classrooms for younger students; a cosmopolitical agora in the second floor, as the main gathering space of the school. Classrooms for older students are organized around an inner forest in the next floor, as in a small village reaching the upper level under a greenhouse structure.” 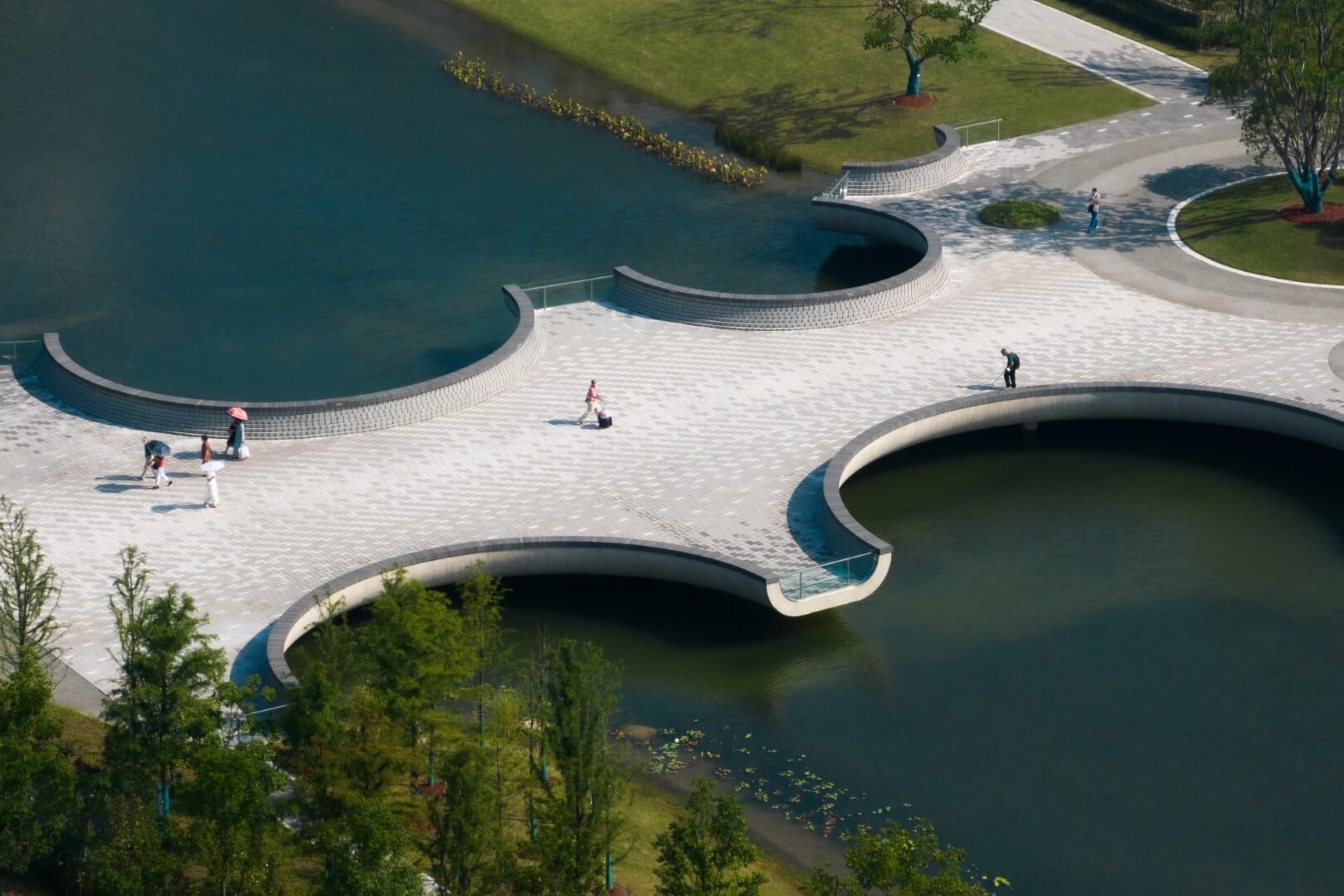 Wu Tao/Shrimp Studio
“The Moongate Bridge marks a moment between a historical referentiality and a contemporary reflexivity. Interpreting traditional Chinese moongate motifs, the bridge’s circular openings frame the water as it spans across a manmade waterway on the former grounds of the 2010 Shanghai Expo. The bridge marks the gateway into the new public park. The form of the bridge conceptualizes two separate pedestrian bridges as a conjoined pedestrian plaza. The resulting landscape offers a series of viewing platforms, meandering paths, and reflection points.

The bridge is a gathering place and a viewing device, inviting pedestrians to look both inward and out. The scene evokes a historical Chinese garden inflected with contemporary material textures. Pavers form patterns to designate areas for vehicles or pedestrians. The bridge’s curving geometries are realized through an array of cobblestones, layered to form a stepped curve that moves up the balustrades.” 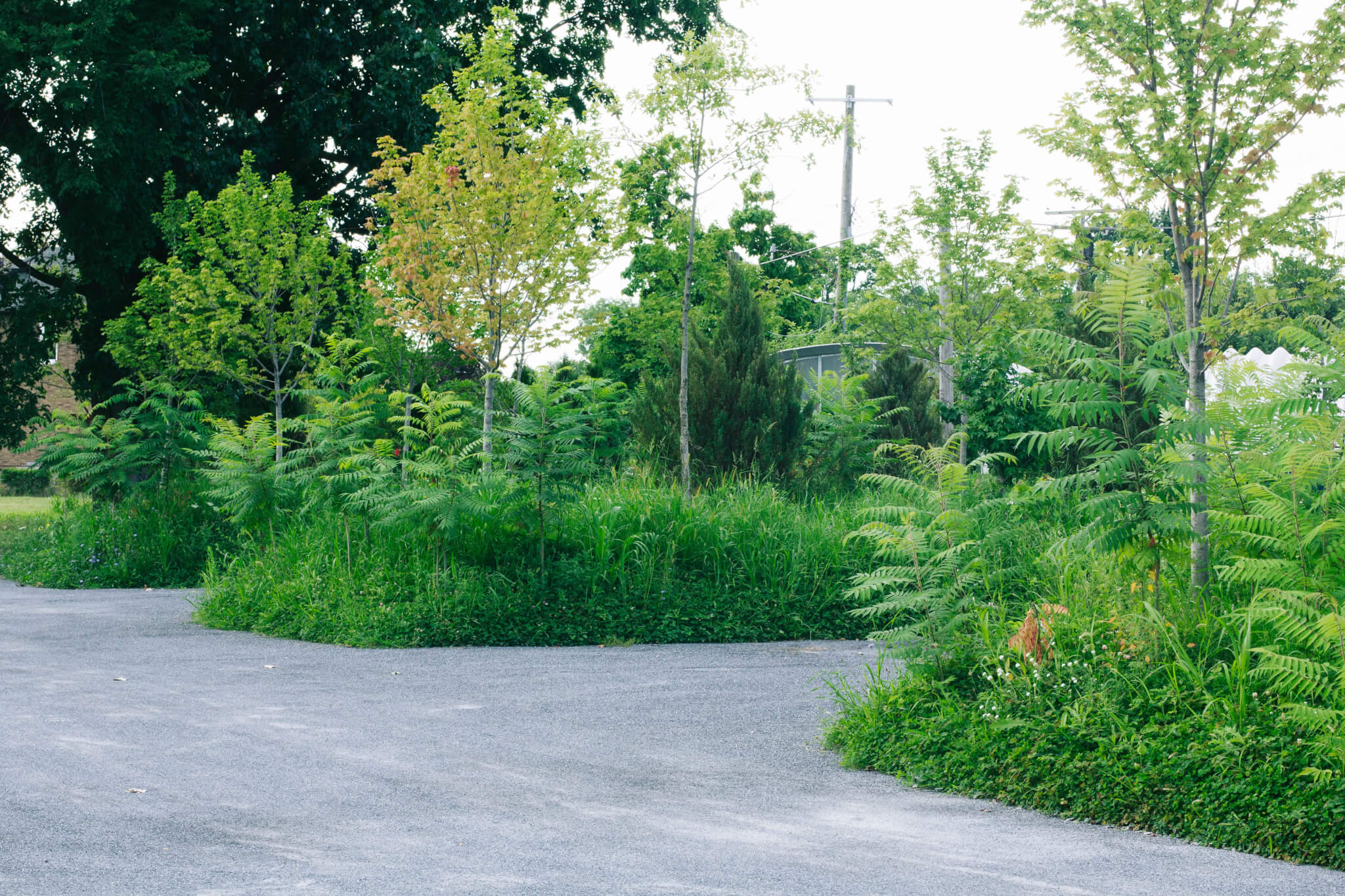 Andrew Schwartz
“Prince Concepts is well-known for creating a distinct urban community within Detroit’s Core City neighborhood, with the integration of public greenspaces and lush greenery at the center of all projects.

In 2022, the company completed PARK(ing) with Julie Bargmann, extending Core City Park with a community greenspace that doubles as a 28-car parking lot. In the heart of Core City, the 21,000-square-foot site is generously punctuated with 76 trees, creating a parking lot that is in harmony with nature—underpinning beauty and functionality in a lush urban environment. Every project, no matter its object, is an opportunity to inspire; with PARK(ing), Prince Concepts sought to create an urban environment that takes cues from the surrounding area and expresses our overall intent in Core City—the creation of inspired indoor and outdoor spaces.

PARK(ing) builds onto this concept while providing the neighborhood with a central place to park cars free of charge.” 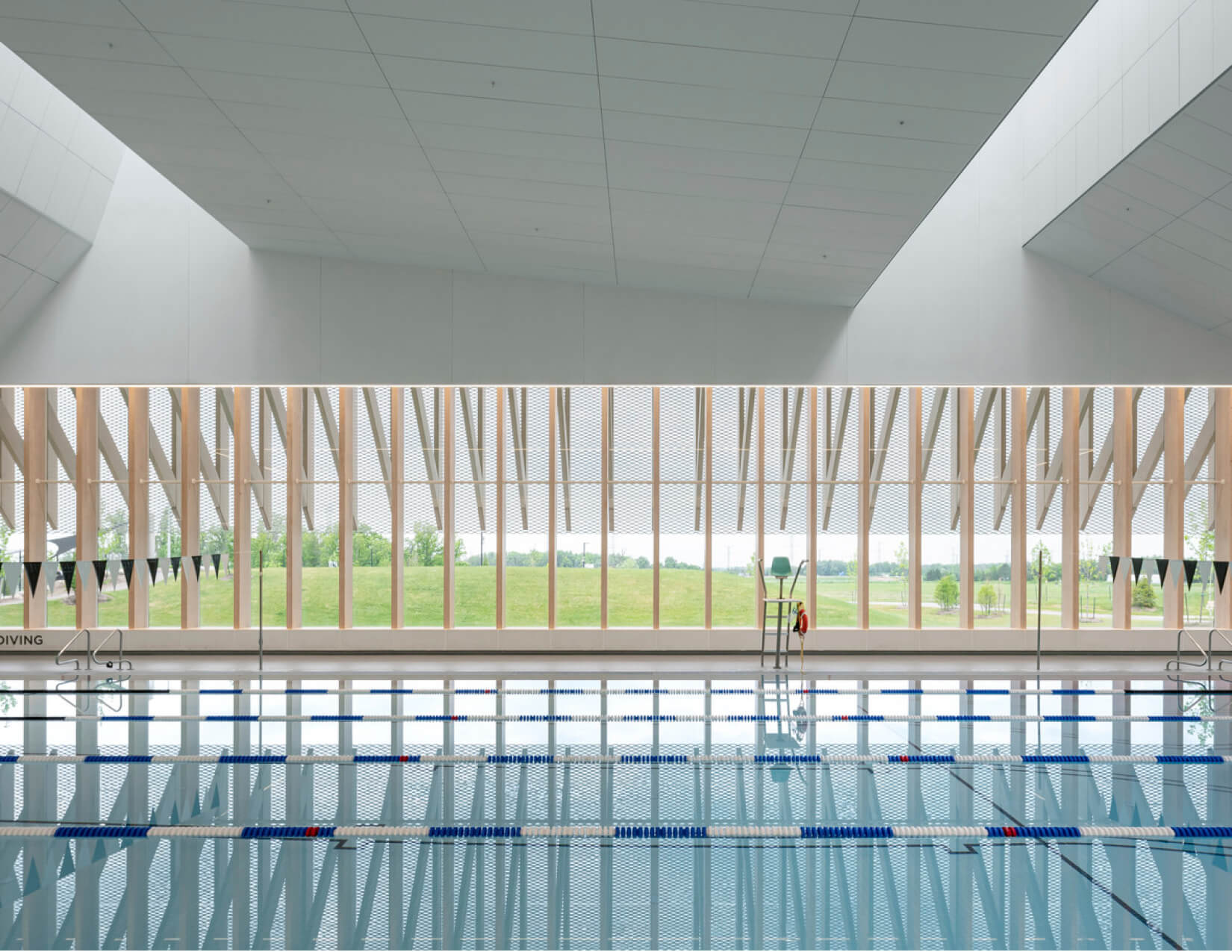 “Envisioned as a glimmering pavilion within a comprehensive park space, the project converts a 50-acre residual site into richly textured parkland, with a 75,000-square-foot Community Centre as its focus. The Centre’s simple yet veiled mass is integrated with the sports/leisure park to form a neighborhood landmark and vital, city-wide destination for gathering and healthful activity. The striking canopy that runs along the facades extends and makes visible the building’s mass timber structure—an array of glulam columns that provide structural and curtainwall framing. Interior spaces are arranged into two bars running the length of the building: the east holds the change rooms, with a teaching kitchen, multi-purpose, and fitness rooms on the floor above; on the west, a wider bar houses the triple gymnasium and natatorium with lap and leisure pools. A trail loop connects all park programs and passes by environmental stewardship zones, a protected wetland, and stormwater management pond.” 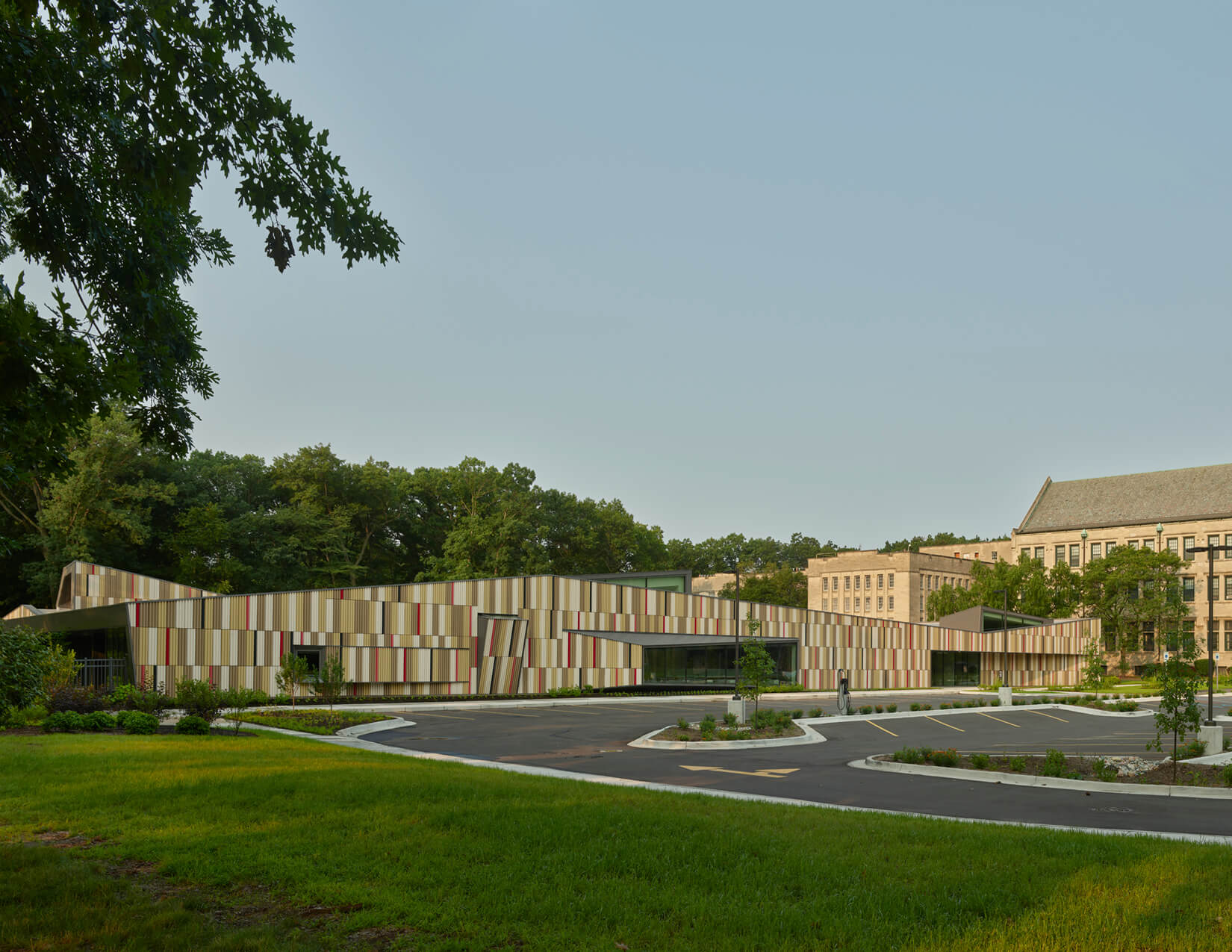 “The Marygrove Early Education Center (EEC) is a part of a newly created cradle-to-career educational partnership, serving students from ages birth through five years old, located on the campus of Marygrove College in northwest Detroit.

Situated on this historic Collegiate Gothic campus, the Marygrove EEC is both resonant and deferential, clad in glazed terra-cotta within a low but distinct profile. The plan is organized around three courtyards that introduce natural light into the building and mark the journey from the building entrance to the classrooms. Accentuated with vibrant colors, each classroom opens to the outside with those at the south facing directly onto an existing, old-growth grove that is transformed into a large natural play space.

The Marygrove EEC offers a place for children to experience the rhythm of the days and seasons, imparting dignity, grace, and joy to the children, families, and community members that the center serves.”

Kendeda Building: A Model of Sustainable Design by The Miller Hull Partnership

Kendeda Building: A Model of Sustainable Design by The Miller Hull Partnership