Bricks on The move – The building consists of 5 entire floors of underground parking, a double height commercial ground floor and 6 Floors above containing state of the art offices with a private terrace on the first floor and a private roof garden on the 6th level. In a city dominated by heavy structures preoccupied with merely an outer facade of buildings the priority was not to impose, touch the ground lightly and to draw abstract and modern inspirations from its cultural context and the its past, looking towards the future.

Architizer chatted with Moeen Afzalkhani, Director and Principal Architect at Ákaran Architects, to learn more about this project.

Moeen Afzalkhani: The hectic surroundings called for a sort of calmness to be added to the site, and for this calmness to carry on through the building mainly by homogenizing the inner and outer layers of the building and by maximizing natural lighting. This idea caused us to think of taking out the mortar in between the layers of bricks and replacing it with light. Hence a unique detail design for the dry installation of bricks to allow in light through even the most solid of materials. The brick concept of the outer elevation layer carries on through all the building levels, as to make the interior volume and exterior layer inseparable entities. 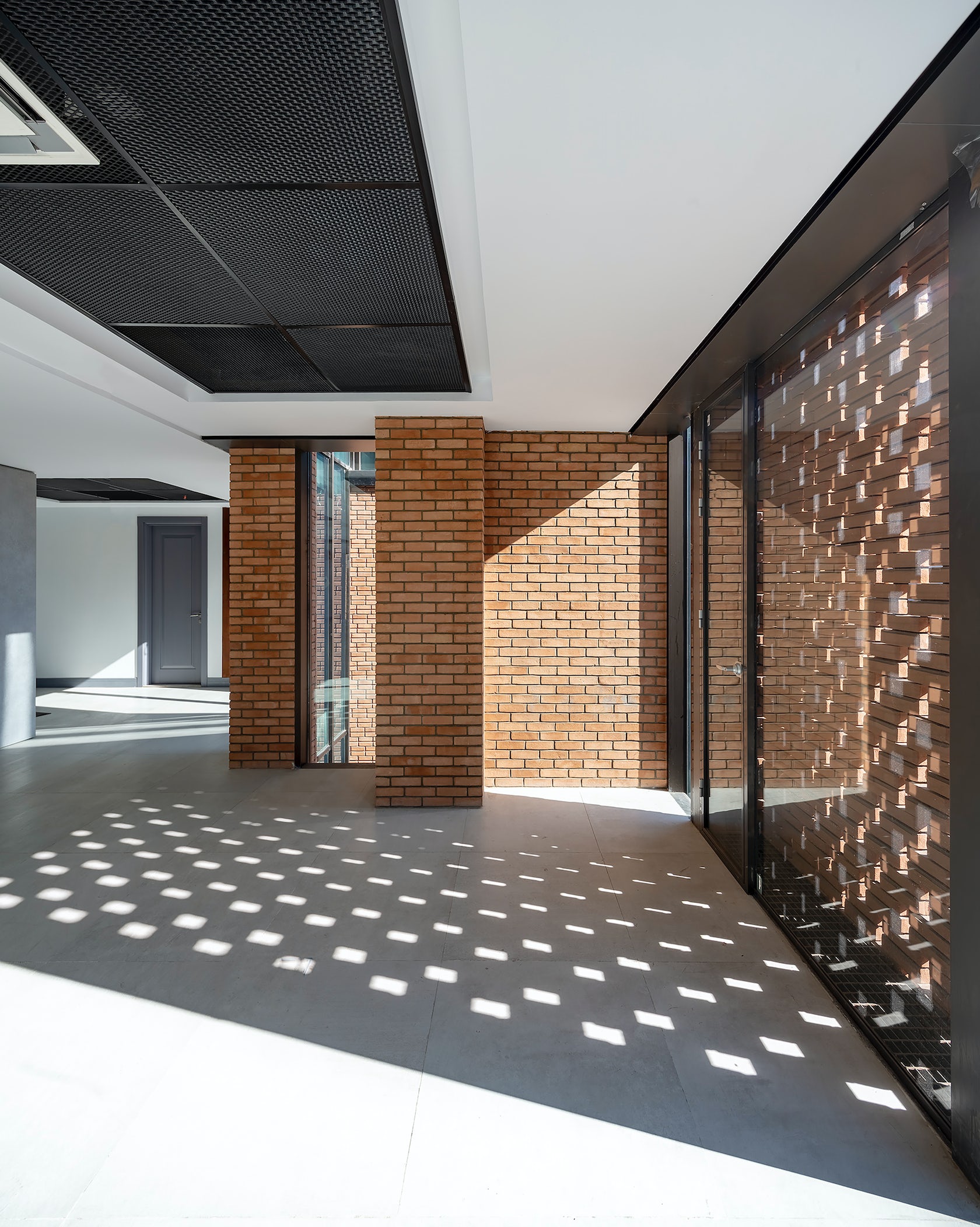 The mobile brick panels on 3 of the office floors raise the most interest. The continuation of the brick modules from the outer façade to the interior of the building spaces, and down to the innermost walls of the underground parking floors created a unique spatial language that follows throughout the structure. It walks the users through the story of the building by engaging them at times when moving the mobile brick panels, or through experiencing the symphony of natural light flowing in from the northern facade into the office lobbies. 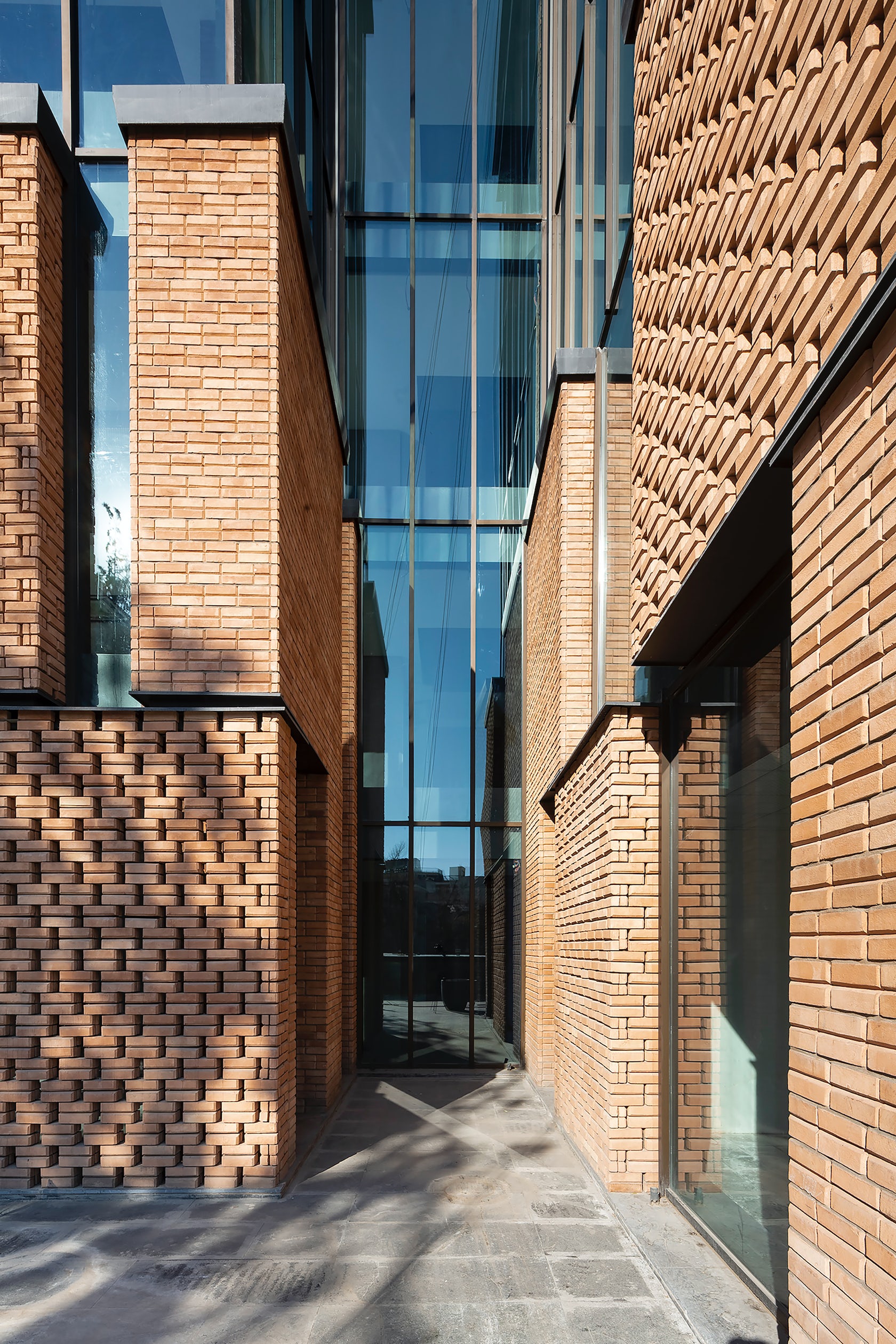 We intended for part of the façade to be mobile, hence the mobile brick panels in the office spaces on floors 3,4 and 5. This was to allow the users to be in control of the space, the flow of light and to also have the opportunity to have a 1:1 dialogue with the architecture. The changing positions of these panels also allow for a dynamic façade looking at the building as a passerby. The mobile panels would weigh over a ton so constructing them in a way that would be easy to move them with a push of ones hand was a real challenge While standing firm at the heart of a main traffic connection, 11 Zomorrod, a stack of three cubes, ties itself subtly to the urban fabric of its surroundings, sitting modestly amongst the volume that envelopes it in an effort to avoid being a burden on its peripheries. The architecture at ground level wraps itself around an existing tree which had to be protected and fortified in the process of a 30 meter excavation into the ground.

The site is situated in one of Tehran’s oldest residential settlements that has been lending itself to more and more offices in the past decade. However down the road from Qoba Mosque and Hosseinieh Ershad (a religious/cultural complex with ideological roots) and with more traditional families at the core of the area, we decided for the architecture to blend in smoothly making subtle modern statements looking to the future. 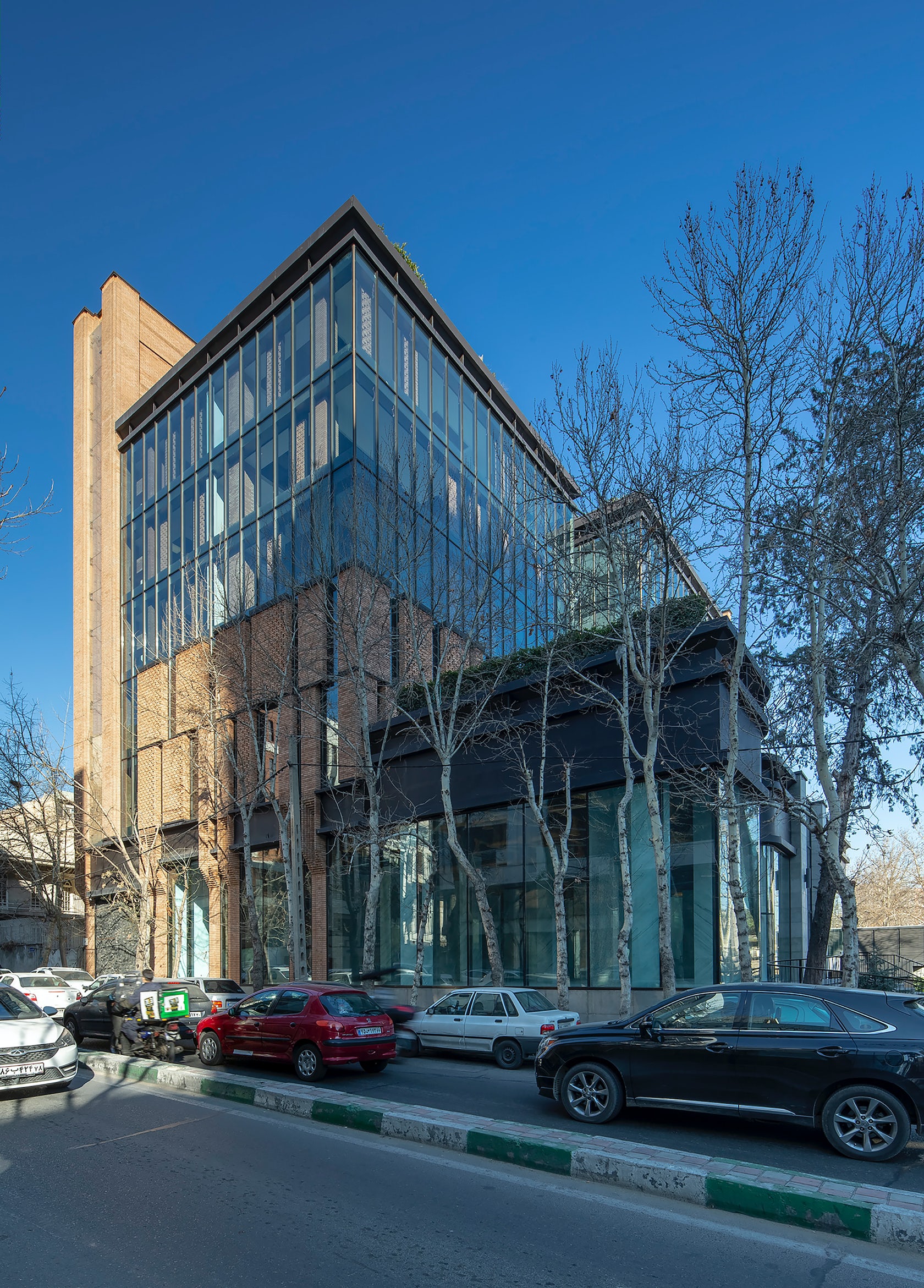 The aim was to create a bridge between what is considered minimal and modern with a traditional language of Persian architecture. Handmade kiln baked bricks juxtaposed with the transparency of glass and the assertiveness of concrete seemed to create the perfect balance. 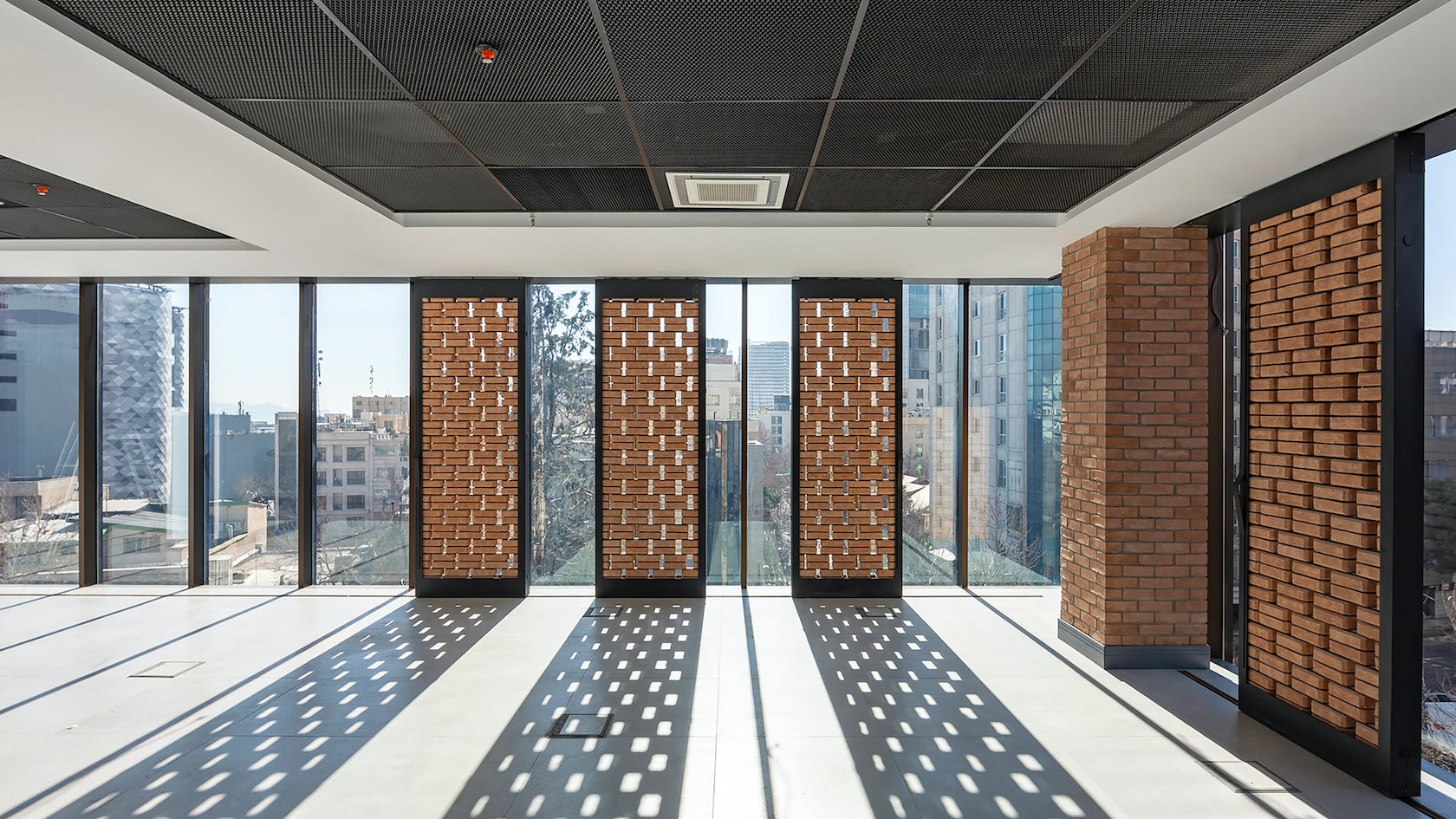 The dry installation and connection of the bricks in the modular panels, static and mobile, with nuts and bolts and rubber washers, together with the individuality of the design of the bricks having been tailor made hollow for this project is rather pleasing. Also sometimes it can just be uplifting to be able to move a 1100 kg wall easily with a light push. Prefabrication and delicate measurements based on design drawings has meant that excess waste has been minimal on all the materials used in this building. Where there has been excess leftover material, such as stone off-cuts, we altered the flooring patterns slightly to be able to use them to keep waste to a minimum.

Most materials were sourced as locally as possible. For the total of just over 20 thousand bricks a derelict kiln was regenerated which created jobs locally once again. Using the latest technologies in the building including ventilation equipment, jet fans etc. which will ensure minimum carbon emission and waste was also important to us. To achieve this with our client in a country where imposed economic sanctions have made it very difficult for the trade of these items to take place was ultimately reassuring. 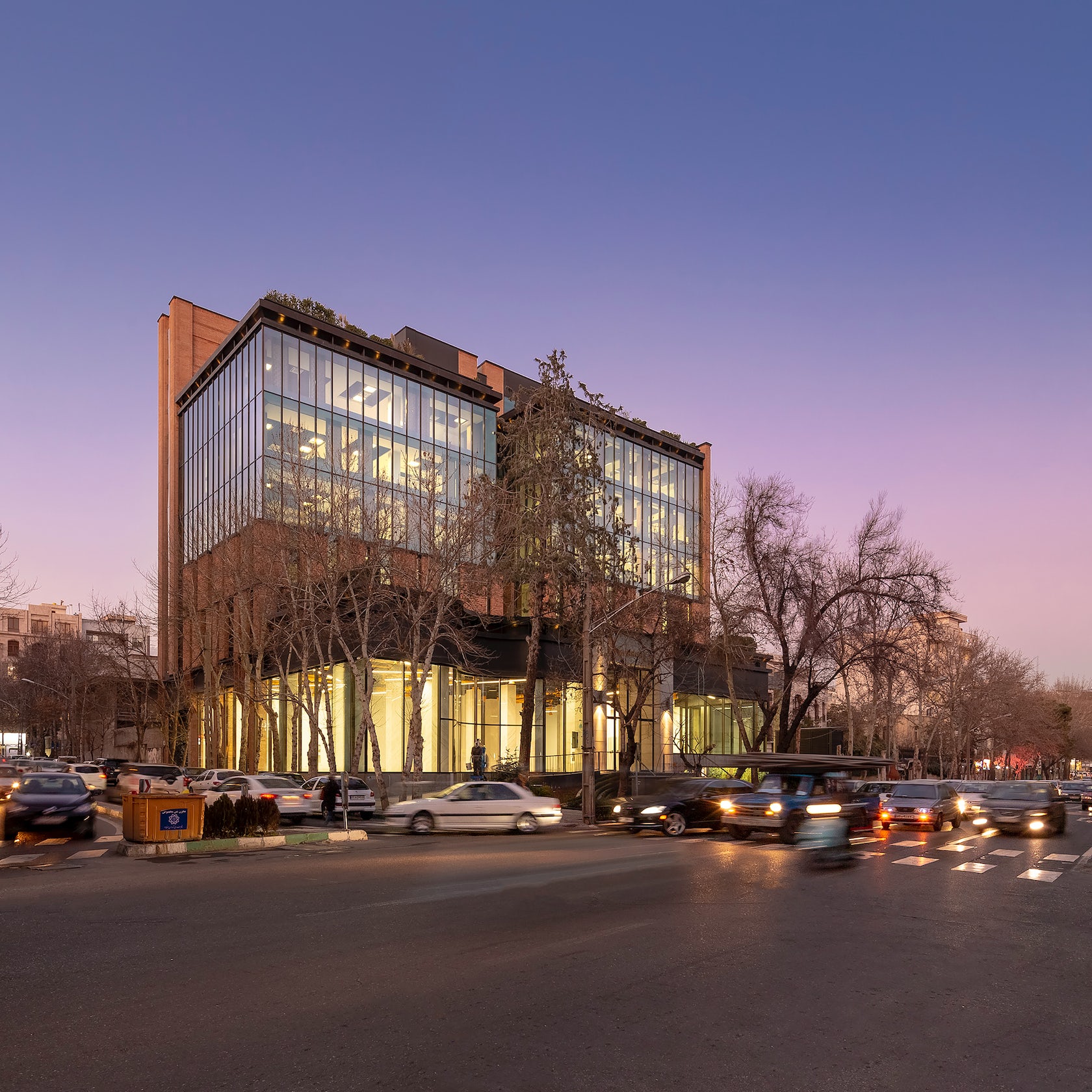 During design and construction, there was constant collaboration among the architects, structural engineers and mechanical engineers which minimized the interference of the disciplines and ensured next to no errors in the design implementation.

In designing the modular brick sections, the structural team and the architects sat with the artisans for hours on end to make sure that the plan would work aesthetically and functionally which it immaculately did due to this close collaboration. 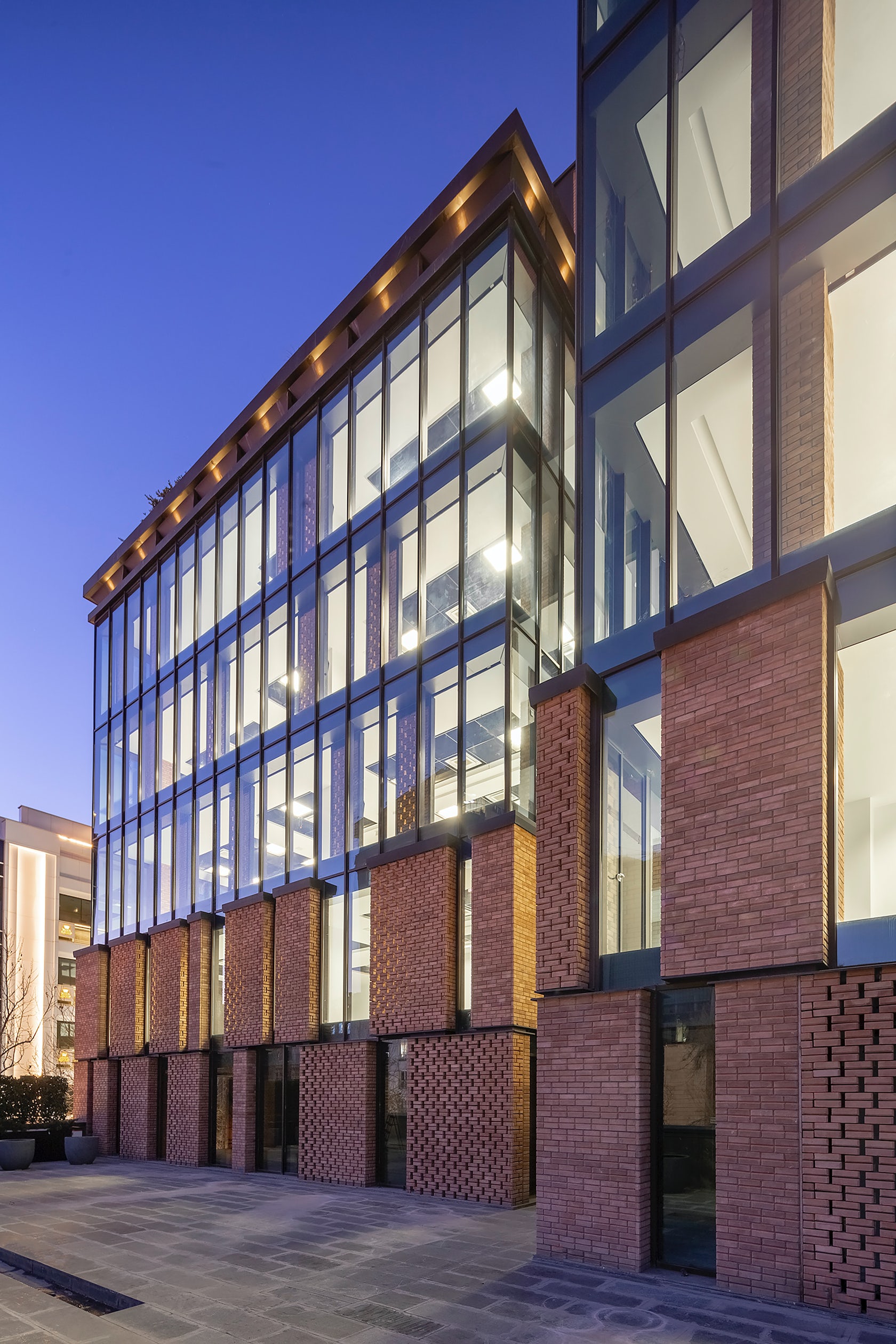 Were any parts of the project dramatically altered from conception to construction, and if so, why?

No, the design process was very meticulously treated and therefore minimal alterations took place during construction.

That patience truly is a virtue, especially if a team believes in an idea when they are aware that a long process of convincing the client awaits them, then every member will do their part to ensure that light will come to life.

Bricks on the Move promotes our vision of putting to use an intelligent simplicity for an architectural language. 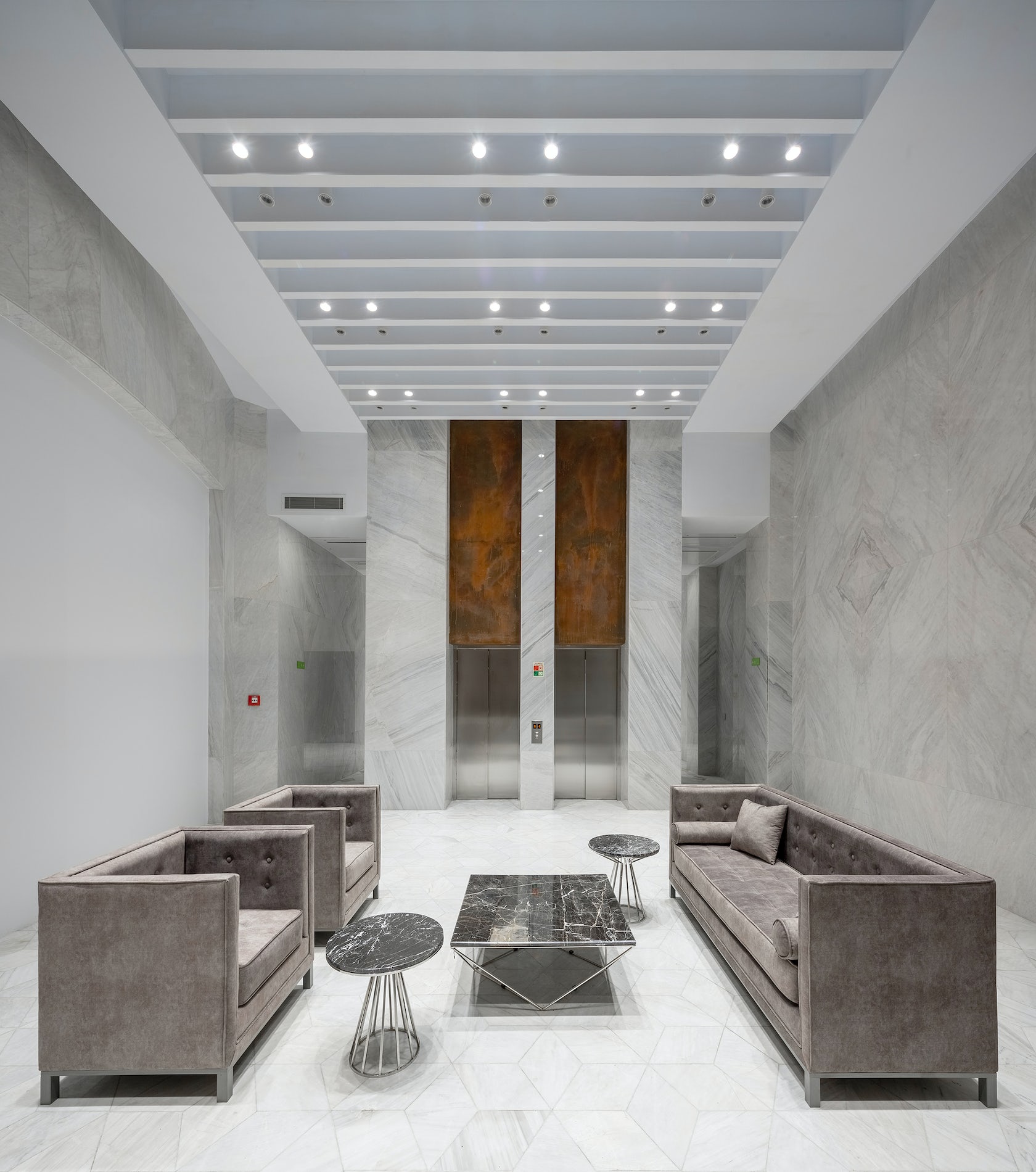 From the feedback that we have received so far, it has attracted a vast clientele who are looking for the same visions and ideals in design. The unique way in which brick has been worked with in this project has also caught the attention of brick lovers.

Bricks on The move Gallery

Creative Ways To Transform Your Home Before Selling It

How to Build a Mini Golf Course At Home

Facades+ will return to Washington, D.C. on February 14